Not all bird fathers invest in their family, but this Father’s Day we’d like to take a look at one HOO does. 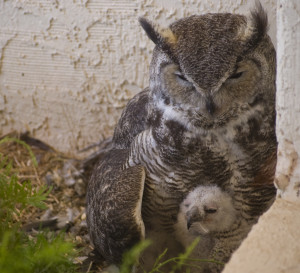 Great-Horned Owl Mom and Chick waiting for Dad to return with food. Photo by Ken Bosma

The Great-Horned Owl dad puts in an epic effort every nesting season. Great-Horned Owls are one of the earliest breeding birds in North America. They start nesting in January or February, meaning that in many places the eggs could freeze if left unattended. Mom needs to stay on the nest and Dad needs to bring home the squirrel, or mouse, or rat, or even skunk! Great-Horned Owls are the only bird that regularly feeds on skunks. Yum!

But it doesn’t stop there…

Feeding his mate is no small task. Unlike humans, female owls are larger than the males. This is true in most owls and raptors (hawks and eagles) as well. So dad starts the nesting season hunting in the winter to feed himself and his mate, who is about 25% larger than he is.

When the two to three chicks hatch, he has to hunt even more. For the first few weeks he has to feed all of the hungry mouths back at the nest by himself. This is because the chicks can’t maintain their own body heat and would freeze to death if mom were to leave. After the first month, the chicks are finally large enough that mom can help with the feeding too. She really needs to help, the chicks can eat as much as a quarter of their body weight every single day.

Once the babies are old enough, usually around 6 weeks, they leave the nest. They can’t really fly for another month, and even after they do, they keep bugging mom and dad for handouts. Young Great-horned Owls have been seen begging for food as late as October, 5 months after leaving the nest!

This Father’s Day, we’d like to thank all of our hard working fathers who kept us fed and took care of us after we left the nest, just like the Great-Horned Owl.

Adapted in part from The National Wildlife Federation. Photo by Ken Bosma

Does the Great-Horned Owl remind you of your dad? Let us know your favorite Dad story in our comments below!

One thought on “Birdeez Bird Father of the Year: The Great-Horned Owl”